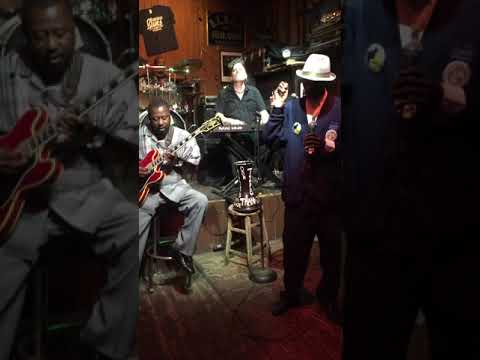 Eddie Taylor Jr., a leading West Side guitar player of traditional Chicago blues, died March 8, 2019 at age 47.  Suffering from longterm health issues, he had collapsed while playing music in church on March 3.

Born March 27, 1972, the talented guitar player, songwriter and singer was the sixth-born of eight children in the blues family of the late Vera and Eddie Taylor Sr. His oldest brother Larry sings and plays drums; brother Tim is a drummer;  sisters Brenda, Edna and Demetria are singers and youngest brother Milton is an avid fan. A sister, Valicia, preceded him in death.

Eddie Jr.'s father, Eddie Taylor Sr., one of the creators of Chicago electric blues during the Great Migration, is best known for playing with VeeJay Records in the 1950s and early 60s.  Eddie Jr. recorded five of his own albums, plus compilations, with Austria-based Wolf Records.  He served as a session guitarist on several Delmark records including the late Little Arthur's "Singin' with the Sun" in 1999 and most recently most recently with Lurrie Bell and the Bell Dynasty on "Tribute to Carey Bell."  He played guitar for the Random Chance CD "Harmonica Orgy" produced by Karl A. Meyer, issued in 2002. He also played on albums by Nick Moss, the late Barrelhouse Chuck, and others.

Delmark coordinated an on-line funeral fundraiser for Eddie Jr. with sister Demetria. Founded by Bob Koester Sr. and now owned by Julia A. Miller and Elbio Barilari, the company said in a statement, "Eddie Jr. was a great guitarist in the traditional Blues style, and a humble person, a rare combination in today's music industry.  He was a quiet person, but when asked for advice about guitar playing, he was more than generous."

In interviews, including Justin O'Brien's liner notes for his Wolf record "Worried About my Baby" in 2004, show Eddie felt some conflict between church music and blues, but could never choose between them.  "That sanctified beat is like playing "Mojo Working" on 78 rpm speed! I like to feel it and express myself musically in church."

Growing up in the hiphop era, Eddie Jr. started in music by spinning records as a DJ, he said, "but I couldn't dance."  Only in the early 1990s, several years after his father's death in 1985, did Eddie discover his talent and interest to play Chicago blues guitar.  At first his mother wouldn't let him play his father's favorite guitar. When his interest grew more serious, she gave the instrument to him.

In his late teens, Eddie's older brothers, drummers Larry and Tim Taylor, squired him  around over-21 into clubs to try his hand at playing, including the Starlite at Fifth and Pulaski. In 1995, Larry remembers, harmonica ace Little Arthur held a successful audition for Eddie Jr at his Artesia lounge on Madison Street, with Larry, Eddie Jr., and their uncle Willie Charles Burns (brother of singer Jimmy Burns) on bass.

Though living most of his life on the West Side, Eddie Jr. has been best known in the last decade for his downtown lunch and dinner solo and duo shows at Buddy Guys Legends. He appeared in the Chicago Blues Festival 2017 and 2018, and played in festivals nationally and internationally.

Wolf Records CEO Hannes Folterbauer commented last week:  "His greatest success was an award from Canadian Magazine Real Blues, for the best Chicago Blues CD of 1998. Eddie was inducted in the Chicago Blues Hall of Fame in 2018 as a Master-Blues-Artist.  He played on a tour in Europe as part of a Chicago Blues Festival with Lurrie Bell. In the studio, Eddie was his own producer, he knew what arrangements he wants for each song. In autumn 2019, we decided to do another CD, but (it would) never happen…The guitar sound of his father was still there. Also he was one of the last, who played Chicago traditional Blues style, like Lurrie Bell, Little Ed and John Primer."

Michael Frank of Earwig Records said Eddie Taylor Jr. "carried on the blues guitar legacy of his father Eddie Taylor for many years while forging his own sound."

In a 2006 interview by this writer for Big City Blues magazine, Eddie Jr. said, "The West Side Sound is like Magic Sam, Otis Rush, Buddy Guy. My dad, Jimmy Rogers, Howlin' Wolf and Muddy Waters electrified the Blues. They brought the sound up from the Delta. The West Side Sound developed later from that.  I'm an old fashioned guy. I've always liked older guys like my dad, Jimmy Red, Lightnin' Hopkins, Robert Johnson, Jimmy Rogers, Charley Patton.  I like hollow body Gibson guitars. I like the sound of Fenders too. I have a twin Fender Reverb amp. There's nothing like tube amps for a good blues sound."

For today's youth who may get interested in blues, his advice in 2006 was: "Study it! Research it, just like school. Go back and listen to the old guys. Don't just play all these fast licks real loud. A lot of guys don't know who really originated a song; instead they call out the name of a well known artist who performed it."

Asked about his hopes for the art of blues, he said,  "I wish we could have a 24-hour blues radio station in Chicago. I would like to see all the musicians further themselves, keep their health up and keep the blues alive."

Good morning my name is Natasha Stewart I am...

On: Complaints mount about West Side...

You got all these people on these corner selling loose...

And it will not change, companies only care about...

On: No change at bakery, workers say

Victim-blaming about the Carla Aiello and Lee Luellen...

On: Is it time to license bicyclists?

There is a thing done in Judiasim called davening. ...