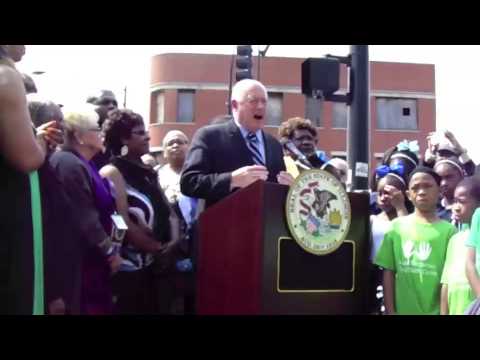 That village, like other certain parts of Chicago and surrounding suburbs, had a long history of hostility against blacks. But the fact that a portion of Cicero Avenue — which extends south into its suburban town namesake — now bears the name of Nelson Mandela just delights Brown-Whitfield.

"I remember when we were not even allowed to walk past Cicero. We could not go south on Roosevelt and Cicero," she recalled.

Brown-Whitfield, president of the Austin High School Alumni Association, was among the many attendees July 18, for the dedication of Cicero Avenue in Austin remained after Mandela, who died in December 2013.

Mandela Road, the stretch that runs from Roosevelt Road to Grand Avenue, was approved by the Illinois General Assembly in May. It joins more than a thousand other honorary streets in Chicago named after notable people. Austin state Rep. LaShawn Ford (8th) sponsored the resolution calling for the renaming in honor of Mandela.

At the dedication, Ford said the goal remains to have all of Cicero named in honor of the South African leader. The partial renaming was an acceptable compromise, said Ford, who was among the speakers at the dedication.

"We know the importance of signs and how they help improve the way we go about our day," he said, speaking to a throng of community members and Chicago media. "All across the world, streets are named after people who have made an impact on society. President Mandela has impacted the world. That's why we're here on the West Side of Chicago today to say thank you, President Mandela, for your symbol of hope."

Quinn said Mandela Road belonged to all of the people, just as Mandela himself did. Ford called upon the governor to lead the way in improving Cicero Avenue/Mandela Road with new businesses and improved street lighting, among other needed upgrades.

The beloved South African leader and humanitarian died on Dec. 5, 2013 at age 95. Ford announced his plans for renaming the street a week after Mandela's death. He submitted his resolution in early April and the measure was approved on May 30. Cicero Avenue is part of Illinois Route 50, which begins in Kankakee and runs north through Chicago and into Skokie, covering roughly 67 miles.

As for next steps for Cicero/Mandela, Ford said it's about creating jobs and bringing in new businesses.

"This is an opportunity for progress…to show businesses that the state and government is invested and, therefore, businesses will come and invest."

Community members at last week's dedication were enthused about the street renaming, including one woman who was also celebrating a birthday on July 18. Following the official ceremony and honorary sign unveiling, Brown-Whitfield echoed Ford's sentiments.

"Today, to me, is an honorable day," she said. "I thank God for Mr. Nelson Mandela, and I thank God for Dr. King and the other peacemakers who helped us."

This comment from Iviwe is a good example how low...

Robb, I would feel you know of that which you speak if...